Just About Ready for Christmas...

After writing this post I got my rear in gear and accomplished all these tasks! We really downsized Christmas this year. Every year I had told myself to stop going overboard shopping and this year I think I have finally accomplished that goal. Of course, not getting in the holiday spirit in a timely manner helped out a lot with that goal. Anyway, without little ones celebrating the holidays with us, we decided to get a small tree that we can plant in our yard--this saved time tree decorating. I only made a few batches of goodies because there aren't enough of us to eat the quantities I made on other Christmases. There has been a change of plans, mil was to have Christmas dinner at her house, but those plans changed and I'm now (as of yesterday) making Christmas dinner at our home and she's making one on Sunday (I don't know why). So, I'm popping a small ham into the oven and stuffing a chicken too. I'm not going to go overboard (2 main courses for only 4 people isn't going overboard???) for dinner. I have to tidy up a little bit and do a little food prep tonight and that's it until tomorrow. Merry Christmas Everyone!!!
Posted by Sharon Marie at 12/24/2010 04:37:00 PM No comments:

Email ThisBlogThis!Share to TwitterShare to FacebookShare to Pinterest
Labels: christmas

Another Towel Ring Crocheted and Our Christmas Tree--Finally!!! 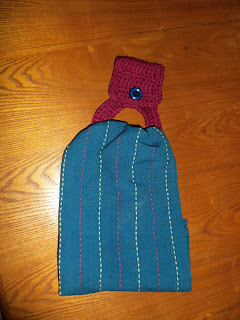 One more towel ring finished yesterday. I made it while dh drove me to an appointment in Louisville. This is probably a "spare" gift and will go into my gift drawer. Or, I might give it to a gentleman friend of the family. He's a single guy and this is kinda "manly." ;) I always like to see a man with a dishtowel in his hands lol!

Here's this year's little tree. I can only remember 2 times my entire life that I haven't had a tree to the ceiling. One year I'm not going to go into but the other time was when dh and I had transferred to Hawaii the week before Christmas and were in a hotel room with the kids. I bought one of those small little bitty trees in a pot and did all my Christmas shopping on Christmas Eve--what an adventure that was! We had our Christmas feast at a restaurant and went swimming afterwards. It was really a special time for us and the boys were amazed that Santa Claus had found them so far away from where we had been living.  This little tree will be planted in our yard after the big day. I'm going to dedicate it to the special people in my family who are no longer with us.

A cross, left near Ypres, Belgium in 1999, to commemorate the site of the Christmas Truce in 1914. The text reads:
1914 - The Khaki Chum's Christmas Truce - 1999 - 85 Years - Lest We Forget.
Christmas 1914, WWI is underway and the troops are homesick, melancholy, stuck in the trenches--cold and depressed. The men on both sides call an unofficial truce and an amazing war-time holiday commences! Below are a few accounts of this holiday truce.
Though there was no official truce, about 100,000 British and German troops were involved in unofficial cessations of fighting along the length of the Western Front. The first truce started on Christmas Eve, 24 December 1914, when German troops began decorating the area around their trenches in the region of Ypres, Belgium.
The Germans began by placing candles on their trenches and on Christmas trees, then continued the celebration by singing Christmas carols. The British responded by singing carols of their own. The two sides continued by shouting Christmas greetings to each other. Soon thereafter, there were excursions across the "No-Man's Land," where small gifts were exchanged, such as food, tobacco and alcohol, and souvenirs such as buttons and hats. The artillery in the region fell silent that night. The truce also allowed a breathing spell where recently-fallen soldiers could be brought back behind their lines by burial parties. Joint services were held. The fraternisation was not, however, without its risks; some soldiers were shot by opposing forces. In many sectors, the truce lasted through Christmas night, but it continued until  New Years Day in others.
Read more: http://wapedia.mobi/en/Christmas_truce

It is one of the most memorable episodes in military history: the famous Christmas Day truce of 1914 when the guns fell silent and British and German soldiers left their trenches to play football in the icy mud of No Man's Land.
The bitter enemies staged an unofficial ceasefire - shaking hands, swapping presents and autographs and singing carols to each other in what Sir Arthur Conan Doyle described as "the one human episode amid all the atrocities which have stained the memory of war."
Now a moving first-hand account of the break in the carnage on the Western Front - one of the most poignant incidents of the Great War - has surfaced in the form of a previously unpublished letter written from the trenches on that remarkable day nearly 92 years ago.
Despite the horrors of daily life for the British Tommy - knee-deep in the slime of waterlogged trenches - the young private describes it as "the most memorable Christmas I've ever spent or likely to spend: since about teatime yesterday I don't think there's been a shot fired on either side up to now."
In pencil on five pages of paper torn from an Army-issue notebook, he tells his "dear Mater" how on a frosty, moonlit Christmas Eve the Germans began placing "lights all along the edge of their trenches and coming over to us - wishing us Happy Christmas etc."
"They also gave us a few songs so we had quite a social party...Some of our chaps went over to their lines. I think they've all come back bar one from E Co. They no doubt kept him as a souvenir," writes the soldier, frustratingly only identified as "Boy."
"There must be something in the spirit of Christmas as today we are all on top of our trenches running about." "Whereas other days we have to keep out heads well down...I had a parcel from B G's Lace Dept containing a sweater, smokes, under clothes etc."
"We also had a card from the Queen, which I am sending back to you to look after please."
"After breakfast we had a game of football at the back of our trenches! We've had a few Germans over to see us this morning. They also sent a party over to bury a sniper we shot in the week." "He was about 100 yds from our trench. A few of our fellows went out and helped to bury him."
"About 10.30 we had a short church parade, held in the trench. How we did sing. O come all ye faithful. And While shepherds watched their flocks by night were the hymns we had."
"Boy" breaks off to help prepare Christmas dinner - "fried bacon and dip-bread followed by hot Xmas pudding", then "muscatels and almonds, oranges, bananas, chocolate, cocoa and smokes."
"You can guess we thought of the dinners at home. Just before dinner I had the pleasure of shaking hands with several Germans: a party of them came halfway over to us. So several of us went out to them."
"I exchanged one of my balaclavas for a hat. I've also got a button off one of their tunics. We also exchanged smokes etc and had a decent chat. They say they won't fire tomorrow if we don't so I suppose we shall get a bit of a holiday - perhaps."
"After exchanging autographs and them wishing us a Happy New Year we departed and came back and had our dinner. We can hardly believe we've been firing at them for the last week or two - it all seems so strange. At present it is freezing hard and everything is covered in ice..."
Near the end of the well-thumbed letter, he tells his mother: "As I can't explain to everyone how I spent my 25th, you might hand this round please...I never expected to shake hands with Germans between the firing lines on Christmas Day and I don't suppose you thought of us doing so."
"So after a fashion we've enjoyed? our Christmas. Hoping you spend a happy time with George Boy as well. How we thought of England during the day. Kind regards to all the neighbours. With much love from Boy." Read more: http://www.dailymail.co.uk/news/article-410741/Historic-letter-telling-WW1-football-match-found.html#ixzz18CUF18ta


Kurt Zehmisch of the 134th Saxons recorded in his diary:
The English brought a soccer ball from the trenches, and pretty soon a lively game ensued.  How marvellously wonderful, yet how strange it was.  The English officers felt the same way about it.  Thus Christmas, the celebration of Love, managed to bring mortal enemies together as friends for a time.
The Truce lasted all day; in places it ended that night, but on other sections of the line it held over Boxing Day and in some areas, a few days more.  In fact, there parts on the front where the absence of aggressive behaviour was conspicuous well into 1915.
Captain J C Dunn, the Medical Officer in the Royal Welsh Fusiliers, whose unit had fraternised and received two barrels of beer from the Saxon troops opposite, recorded how hostilities re-started on his section of the front.
Dunn wrote:
At 8.30 I fired three shots in the air and put up a flag with "Merry Christmas" on it, and I climbed on the parapet.  He [the Germans] put up a sheet with "Thank you" on it, and the German Captain appeared on the parapet.  We both bowed and saluted and got down into our respective trenches, and he fired two shots in the air, and the War was on again.
We must all remember this event as a symbol of what brings us together and what really matters in the world.  The world can be a cruel and evil place at times, but even in the middle of the carnage of World War I, enemy forces could embark from their trenches and shake hands.
So in conclusion, I say to all on here (and yes I even include the Manchester United supporters) Merry Christmas and may God Bless you all during this special time.
The picture for this article is a cross, left near Ypres in Belgium in 1999, to commemorate the site of the Christmas Truce in 1914. The text reads:
1914
The Khaki Chum's Christmas Truce
1999
85 Years
Lest We Forget.
More information: http://bleacherreport.com/articles/96825-the-night-the-guns-fell-silent-football-christmas-and-world-war-i