I'm very happy today as I'm typing this because Debi of Dly's Hooks and Yarns wanted to give me the Versatile Blogger Award. I am so appreciative of having my blog liked and that is the best award there can be. I'm not going to accept awards though. I was going to but I can not limit who I pass the award on to. I've sat here in front of my computer for almost an hour trying to figure out who I'll give an award to and I just can't do it, so I'm very politely declining to participate in blog awards. I do hope y'all will visit Debi's blog and see why she is so deserving of award status! Take care everyone...

I had always thought that flag afghans were ok but I was WRONG! After doing a little researching online, I found the following information about flags on clothing, bedding and that sort of thing:


According to the Flag Code, a flag is anything "by which the average person seeing the same without deliberation may believe the same to represent the flag."

Source: Flag Code, Section 3
Therefore, a flag includes any representation of it of any substance, with stars and stripes of any number. This would include T-shirts and ties.
Other references in the Flag Code relevant to this question are:
The Flag Code states that the flag should never be worn. (Section 8d): "The flag should never be used as wearing apparel."
I always thought the beautiful flag-like afghans were ok to make because they're not an exact replica. Guess it's true that we learn something new every day. For more information on the U.S. flag, go to this page.
I was working a little bit last night on my scrap afghan that has been a WIP seems like forever. I had some purple and a variegated purple that I thought I could get a pair of slippers out of before I used the remainders in the scrap 'ghan. I modified the pattern a little bit so that I was sure to have enough yarn. Take a look: 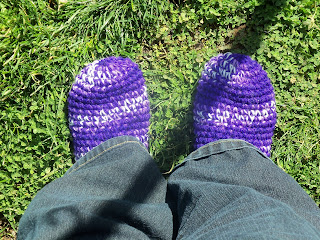 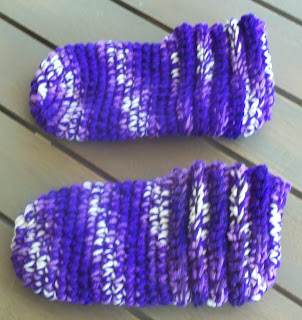