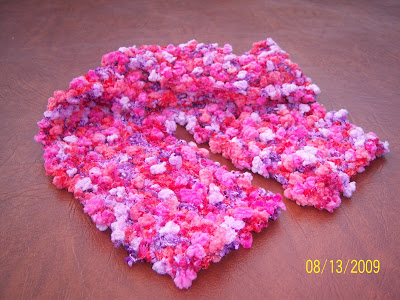 Here's a scarf I finished some time ago for Leslie. I love the looks of this yarn but DESPISE crocheting with it. The texture of the yarn makes it very difficult to see the stitches. I ended up going the easy route of only using double crochet for the entire thing. I attempted a hat out of the same yarn and suffice it to say, it has been donated to the trash can lol! I am currently making a baby blanket for my cousin's baby boy (due in October) that I've had to modify the pattern I'm using because I kept goofing it up. Here's the pattern I started with and then I basically came up with my own idea based on ribs and shell design. I'm making it larger than called for because I think that after spending so much time and effort making baby blankets that they should be used when the baby is a toddler too. Hopefully it won't be too much longer before I have it completed and pictures posted for you to see. Hugs to all!