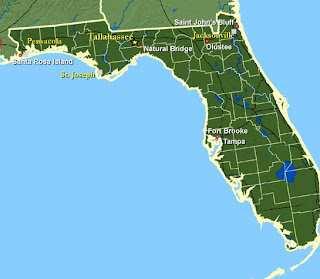 On January 10, 1861, delegates to the Florida Convention in Tallahassee voted to secede from the United States of America. By February, Florida and six other southern states had formed a new government, the Confederate States of America. Four other states joined a month later. The Confederate states were South Carolina, North Carolina, Virginia, Georgia, Alabama, Mississippi, Florida, Louisiana, Tennessee, Texas, and Arkansas. Jefferson Davis, from Mississippi, was elected President and Montgomery, Alabama was selected as the capital, though it was soon moved to Richmond, Virginia.

Florida's Role in the Civil War