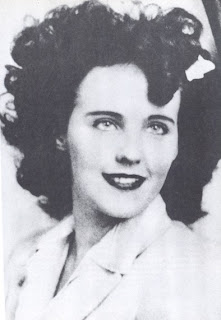 Today I think we'll take a look at an unsolved crime from the 1940s.

On this day, January 15th, 1947 the mutilated remains of 22-year-old Elizabeth Short, who came to be known as the "Black Dahlia" were found in a vacant lot in a residential area of Los Angeles, CA. Short was born on July 29, 1924, at Hyde Park, Massachusetts. She was murdered on January 14, 1947.  Numerous persons were questioned in the murder of Short, but her killer was never found despite investigations by the FBI and local authorities.  This murder has been the subject of numerous movies.

If you're interested in the 2006 movie The Black Dahlia, here's a trailer for it: