Here are 6 more dishcloths. These are for Christmas gifts. 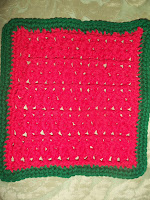 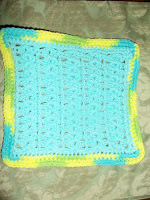 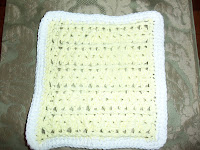 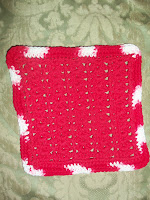 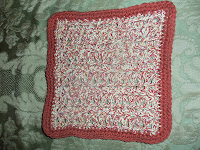 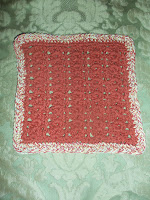 Miscellaneous Things on My Mind....

The Sister Wives show has started to irk me. I used to watch it and feel kind of sorry for the wives and I believe that their upbringing and shared husband  have brainwashed and manipulated them into an unhealthy and illegal lifestyle. Now, with each wife getting her own home with over 3000 sq ft of living space and in at least one a wet bar I think that WE are being taken advantage of and that TLC is being irresponsible promoting an illegal lifestyle. The family is selling overpriced jewelry and are expecting the public to purchase it and support their lifestyle. Yeah, I know, most of us have broken the speed limit and that's breaking the law and shame on us if caught we're going to pay a speeding ticket. These people just got a free pass and the prosecution of them is off. I wonder if stud muffin will get hitched again if ratings go down??? Soon these ladies, models of fashion, will soon be selling clothing too. I don't really think I want to base my wardrobe on what they consider fashionable. 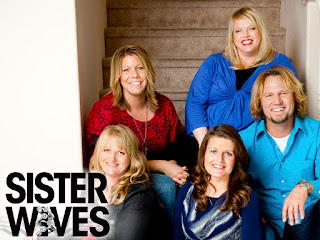 Recently I went to the facebook page for their jewelry. They have designed some beautiful pieces but they are definitely not for the budget conscious  I probably shouldn't have, but did, leave a note that even though they seemed like nice people, I wasn't going to support an illegal lifestyle by purchasing from them. Boy, was I slammed by some readers. I deleted the post but not before saving a copy of it.

Gun control is another thing I have strong feelings on. Do I think that we should make guns illegal? Nope. I don't own a gun and don't plan on purchasing one either. I do think that comprehensive background checks should be done, that anyone with felony convictions should not be allowed to own/use guns and that limits on the number of weapons an individual can own should be put in place. I heard one gentleman on television (can't remember his name, sorry) say that guns are not biodegradable and the millions of them that are already owned will not go away. That means that there may always be guns involved in crimes and that those wanting to purchase a gun for target shooting or self-protection won't be able to.  Convictions on using guns in a crime, illegal ownership of guns, loaning out of guns used in crimes or illegal attempts to purchase a gun should result in life in prison--at hard labor, sort of a chain gang type thing. Penalties for many crimes are not severe enough. This is a bit off subject but the neighbor and I were talking not long ago about how if a person abuses a pet the pet will be removed permanently from the home but if a child is abused, the abuser will be ordered to classes/treatment and will get a 2nd chance with the poor child. Sometimes I just don't understand how such a great country can be so irresponsible.

OK, that's out of my system. I've been making some dishcloths lately and I'll post some pictures of them when I finish the one I'm working on. I'm going to make some cookies later on today.