I Lucked Out: My Thrift Store Find

Today I decided to stop at the local Goodwill thrift store.  I wanted to pick up a few paperbacks since I find it ridiculous to spend the "big bucks" on them at WalMart and other retailers.  I only do that for a select few authors that I really like. I checked out the very small selection of craft-like items.  Usually, I don't have much luck finding crochet patterns or yarn at thrift stores in our area.  Today, however, I lucked out and found a small book of crocheted patterns for afghans at only 50 cents!  Yippee!  Here it is: 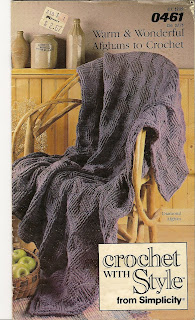 Afghans to Crochet (Crochet with Style from Simplicity, 0423)

Many of us enjoy crocheting gifts for family and friends.  In the days when my grandparents were children, crocheting or tatting was not always a leisurely pursuit but rather a way for women to supplement the family income. Often, they would work in their tenement homes with inadequate light and ventilation.  Here are some photos of a few of these craftswomen that are posted at the Library of Congress site.  The titles of the photos are the original from the LOC. 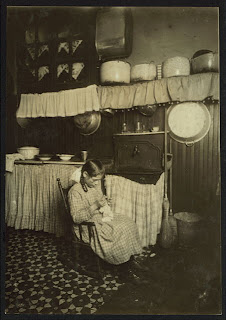 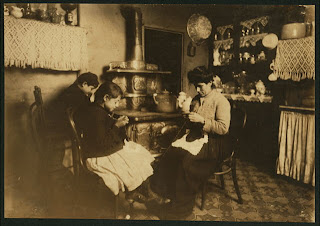 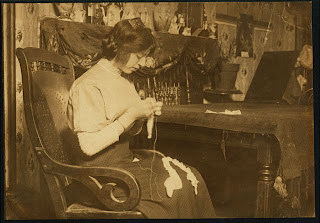 Title: Celina Anzalone, 2264 First Ave., making lace for Cappallino's factory, near by. She said she was doing it only until Christmas. Location: New York, New York (State)
*** 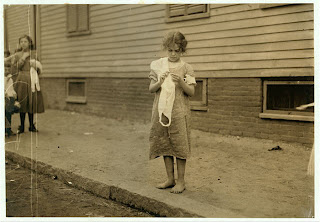 Title: A typical view of Carmina Caruso, a ten year old Home Worker as she walks around crocheting as she goes. Location: Somerville, Massachusetts. 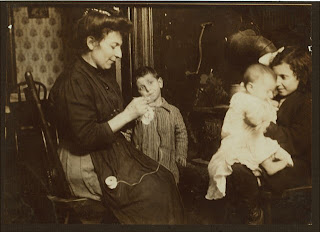 Title: Italian family living 428 E. 116th St., 2 floor back. They were so illiterate I couldn't get their names. Have been in U.S. only one month. Mother is learning to make lace for factory near by. Location: New York, New York (State)
*** 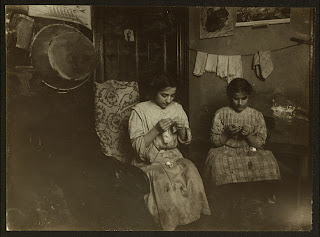 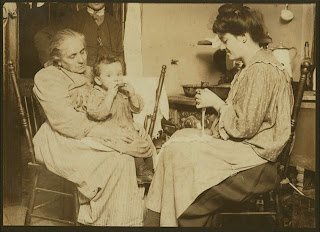 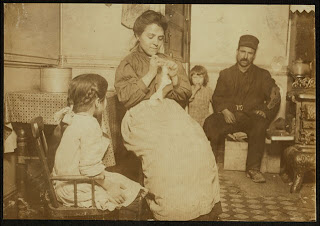 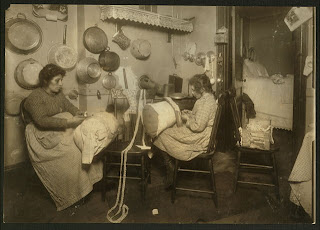 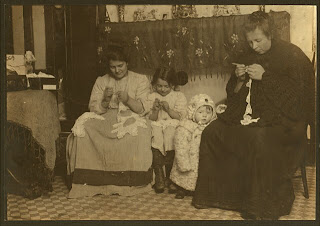 Title: Home of Mrs. Rosina Schiaffo[?], 301 East 114th St. 3[rd] floor. She is a Contractor, getting lace from the home-workers in the neighborhood, (woman in black has just brought in some work), and the lace goes to M. Weber Co., a manufacturer, 230 E. 52[nd] Street. On the couch with Mrs. Schiaffo is seven-year-old Millie, who is learning to make lace. Father is a street-cleaner. Another little girl, about seven, was at work on the lave when I came in, but she fled. Location: New York, New York (State)
*** 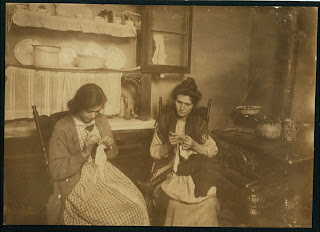 Title: 4:00 P.M. Making lace collars at home (usually in kitchen). Mrs. Vencique, 309 E. 110th St., working with baby asleep in lap. Her sister, Tessie Amendola, 15 years old, works all the time. Some days she says she makes over $1.00 a day. At times only $2.00 a week. Been working at it three years. One of them was making lace for a contractor, Marchina, 207 E. 109th St., top floor (in an old dwelling). The other was making lace for factory, P. Cappellino, 401 E. 116th St. Husband is plasterer and "works some." Location: New York, New York (State)
***
The above photos were all taken by Lewis Wicke Hine (click on his name for biographical information source). Hine was an American sociologist and documentary-photographer born in Oshkosh, Wisconsin, where he studied at the State Normal School, completed courses in drawing and sculpture, and worked in a factory before studying sociology at Chicago University in 1900. A self‐taught photographer, he moved to New York in 1901, becoming an instructor in nature studies and official photographer to the Ethical Culture School. In 1905, informed by his training in sociology, and with his reformist interests sharpened by his experiences at the school, he began using the camera to study social problems by recording the arrival of immigrants at Ellis Island. These images led the National Child Labor Committee to hire him for its campaign to ban child labour in agriculture, the canning and textile industries, mining, and other places progressive reformers regarded as unsafe or morally unfit for children. While working for the NCLC, he completed his master's degree in sociology at Columbia University. He first published his photographs with accompanying text as an essay in Charities and Commons, later better known as Survey magazine, in whose pages his passionate opposition to child labour appeared regularly. Between 1908 and 1918 the NCLC sent Hine throughout the eastern states to document the prevalence of the problem. Using flash-photography techniques pioneered by Jacob Riis, he documented young boys working underground in coal mines in Pennsylvania. Plant managers at southern textile mills tried to exclude him from their premises. Always he accompanied his images, intended for use in posters, pamphlets, lantern lectures, and other NCLC campaign media, with detailed captions describing working conditions, the ages of the children, and, if possible, their wages. Hine also did occasional photographic work for the American Red Cross between 1910 and 1914, and between 1918 and 1920 documented post‐war conditions in the Balkans, Italy, and Greece, images which became part of The Human Cost of War.  Hine began to receive recognition as a photographer rather than simply as a reformer, when his first one‐man show was mounted. He continued to work as a photographer and photo director for Survey and for the Red Cross. Notwithstanding his standing as a reformer and photographer, his experience photographing construction of the Empire State Building, New York 1931, and the work of the Tennessee Valley Authority 1933 and Rural Electrification Administration 1934-1935, Roy Stryker did not hire him for the FSA's monumental documentary photographic effort. Instead Hine became photographic director of the National Research Project of the Works Progress Administration.

***
Search Amazon.com for Library of Congress