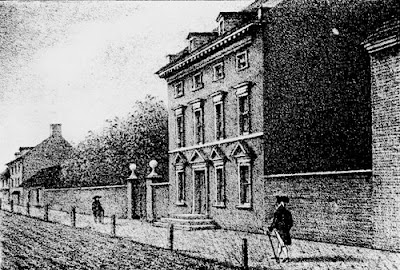 On 17 August 1790:
The capital city of the U.S. moves to Philadelphia from New York City. So you always thought the capital of the United States has always been Washington, D.C.--nope, that's not true. Congress had met in numerous cities including New York, Philadelphia, Princeton, Baltimore, Annapolis, Trenton and York before settling in the newly formed Washington, D.C. You can read more about this at http://www.destination360.com/north-america/us/washington-dc/history.php . The picture is of the President's house in Philadelphia where George Washington lived.

Here's an update for you on my food preservation. For the first time, I was able to harvest peaches from our dwarf peach tree! I raced the squirrels for the fruit and I mostly won! I used splenda instead of sugar in the syrup for them. The "syrup" is rather thin and watery though. I was able to bag 4 quarts. I should be able to use the peaches and make a delicious peach cobbler. Warm peach cobbler with sugar-free ice cream on top--YUMMY!
Posted by Sharon Marie at 8/17/2008 09:50:00 AM No comments: