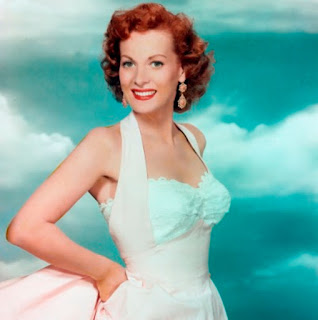 One of Hollywood's great actress has died. Maureen O'Hara passed away on Saturday, October 24th, 2015. She was one of my favorite actresses. At birth, she was named Maureen FitzSimons. She was born on Aug. 17, 1920, in Ranelagh, Ireland, on the outskirts of Dublin. She was the second of six children of Charles FitzSimons, a clothing-business manager and part-owner of a soccer team, and the former Marguerita Lilburn, a singer. Maureen began appearing in school plays as a child and was accepted as a student at the Abbey Theater in Dublin when she was 14. Actor Charles Laughton convinced her to take the stage name of O'Hara because he claimed that "nobody would ever get [FitzSimons] straight."

Movies she starred in included “The Hunchback of Notre Dame” (1939), in which she played the haunted Gypsy girl Esmeralda to Charles Laughton’s Quasimodo; the Oscar-winning “How Green Was My Valley” (1941), in which she was memorable as a Welsh mining family’s beautiful daughter who marries the wrong man; “This Land Is Mine” (1943), a war drama in which she was directed by Jean Renoir; and “Miracle on 34th Street” (1947), the holiday classic in which she played a cynical, modern Macy’s executive who tries to prevent her daughter from believing in Santa Claus. My all time favorite movie of her's was "McLintock" (1963) with John Wayne. Other movies include:

I have tried to find links to watch the above movies for free. A few I was only able to find trailers for.

that came out in 2005. Other books about her include "Maureen O'Hara Unauthorized & Uncensored,"

For more online reading, you  may be interested in:


The world has lost one of the few remaining great thespians. Rest in peace Ms. O'Hara.