I have an addendum to this post where I made a slide show of all projects completed in 2012. I didn't think I'd make anything else but, I did. These are my absolutely final, finished projects for 2012!

First off, I made the 2 yellow dishcloths. I retrieved a ball of yellow cotton that had been languishing and forgotten in a corner, under the couch for who knows how long. After digging it out, dusting it off, I spilled coffee on it. I decided to go ahead and make the dishcloths and then toss in the washer. No big deal if they were stained because none of my other dishcloths are pristine either. Take my word for it, working with cotton yarn that is damp in some places is not an easy thing to do. 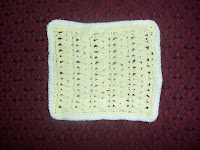 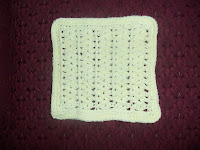 For Christmas, I had given the gentleman next door some dishcloths. He thought they were potholders but they're not so I made him these to coordinate with his dishcloths. 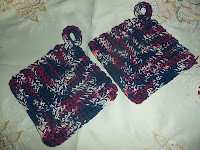 Then, the leftover yarn I had from these and a small ball of reddish stuff that coordinated, I made this dishcloth that I'll go ahead and have dh give to him too. 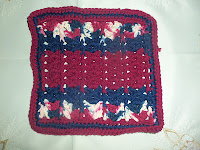 
I had a little extra time to crochet because dh and I were both down with the flu bug that's resistant to the flu shot given this year.

First project for next year is to pick up an ufo afghan. I only have about 6" finished.  I've promised to make this for someone and I really need to get my rear in gear and get it done. 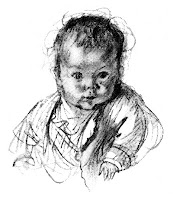 It is hard to believe that today is the last day in 2012. As I've gotten older, the years seem to go by in the blink of an eye.  When I was younger, I remember that "old" people seemed to frequently reminisce but now I realize they were talking about current events. I'm off topic here but I just had to share that thought with you. Today's link to a free pattern is for a baby vest . It has granny squares and is adorable. Check it out here for yourself. Thanks for visiting!