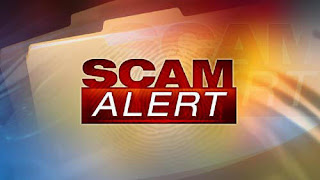 Go here to learn how one man RECORDED his call from the scammer "Credit Card Services." I do NOT recommend doing this but it is interesting to know how shameless these scammers are! I recently wrote about my experience with this hoax. Be careful folks!
Posted by Sharon Marie at 6/03/2010 11:38:00 AM No comments:

Almost Forgot to Show This Project 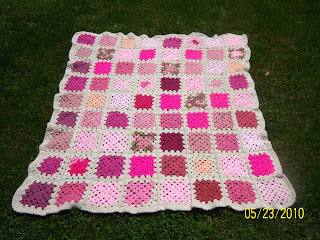 Here is a lapghan that I have made to donate.  I have problems with joining squares and having the edges turn out "funny."  I had read somewhere on the Internet to omit the chains in the corners on the final round when making squares.  Didn't work for me this time! I think I did put an extra single crochet between squares and that may be what caused the ruffle effect.  I'll have to try something else the next time.  I still have the gray and claret colored squares to join.  I did not omit the chains in the square corners so I'll have to see how that turns out! In one direction, I whip stitched the squares together and the other I crocheted them.  This would have been my third lapghan for donation but I used one to wrap my poor Barney in when she went to the vet to be put to sleep.  I'd like to make about 1/2 dozen and then donate them. I'm not too fast though--these squares have been made since last year except I decided to make it a little larger and had to make another rows worth. Thanks for stopping in! Hugs...Sharon