I love pizzelles and I try to make them every year at Christmas time. I thought I'd put the recipe here for you.

I made 2 batches of these tonight. For some reason the batch I made with Splenda instead of sugar turned out heavier--the batter was more like a dough. Maybe it was the Splenda or maybe I added too much flour (I was making a double batch). Anyway, the "normal" ones turned out great.

I may have posted this recipe before but this year I upped the amount of anise I use by adding an additional 1/2 teaspoonful.

Here's a few of the pizzelles I made tonight: 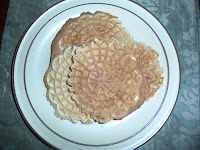 It's time for some hot chocolate and a pizzelle to dunk in it.