August 9th, 1910 Alva Fisher patents electric washing machine. Throw out the scrub board and stop beating your laundry on the rocks by the stream! Yippppeeee a washing machine! With my overflowing closet and my procrastination about doing laundry, I would spend a month of Sundays at the ol' river washing my clothes if it wasn't for Mr. Fisher. Go to this url to check out a little bit about the history of washing machines http://inventors.about.com/od/wstartinventions/a/washingmachines.htm. 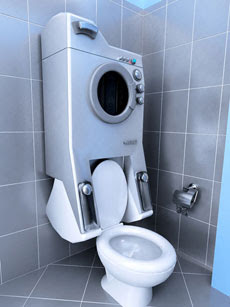 Check out the picture I have posted here of a concept washing machine that may even clean itself every time you flush it. It is a washing machine-toilet that flushes with the washer water! Go here to this link to read a little bit about it http://www.envirogadget.com/recycling/combined-washing-machine-and-toilet/.

Pickles are all pickled! What a time-consuming job and recipe I used. I was getting really frustrated trying to use my big stockpot to sterile jars and do the hotbath of the canned pickles in. When I splashed myself twice with boiling water because I didn't have the whatchacallit to move the jars in and out of the boiling water with I stopped what I was doing and dashed over to the local discount store to buy a big canning pot with the basket in it and the canning tongs (I guess that's what they're called). I had about a 1/2 dozen tomatoes and a small bowl of cherry tomatoes that we weren't going to use before they went bad so I made tomato sauce and canned it. I only got 2 small jars but hey, at least it didn't get wasted.
Posted by Sharon Marie at 8/09/2008 11:17:00 AM No comments: