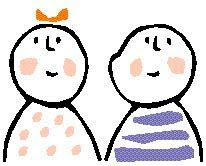 For your enjoyment, here is a bit of humor. This is one of those "kids say the darndest things" when kids were talking about the Bible.