Tomb of the Unknowns Dedicated This Day in 1921 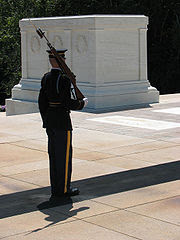 On this day, November 11, 1921, U.S. President Warren Harding dedicated the Tomb of the Unknowns at Arlington National Cemetery in Virginia. On March 4, 1921, Congress approved a resolution providing for the burial of an unidentified American soldier, following the custom adopted by other allied countries after World War I. The site was to be the plaza of Arlington National Cemetery’s Memorial Amphitheater, which had been dedicated the previous year.

On Memorial Day, 1921, an unknown was exhumed from each of four cemeteries in France. The remains were placed in identical caskets and assembled at Chalon sur Marne.  Ultimately they were interred at Arlington.  Then on Memorial Day, May 28, 1984, President Ronald Reagan presided over the interment ceremony for the Vietnam Unknown service member.
To read about the history of this monument, go to this army page.
Posted by Sharon Marie at 11/11/2009 10:16:00 AM 1 comment: Links to this post