Spiderman Needs an Afghan Too...

A friend of mine shamed me because I made blankets for my friends when they had babies but she didn't get  one for her son.  Shame on me!  She liked the Spiderman version of the round ripple because her son is wild about Spiderman.  So, I put my mind to making one for the little guy.  Then, I got sidetracked and the the thought "I have plenty of time to do this.  It'll go fast."  Yeah, right.  When I finally got down to the nitty-gritty, I ended up making it a few rounds shorter than planned and I was weaving in those irksome ends as I was riding down the road to see them!  Didn't get a chance to do a quick laundering so the little guy has also received some strands of little doggie hairs from my "kids."  He asked me what the ghan was for and I told him that when he covered up with it then Spiderman's web would keep him warm and safe.  His mom has reported to me that he has tossed aside his store-bought blanket.  This little guy is so cute and I was so happy to have a crochet project so well received.  Here's a picture of it--- 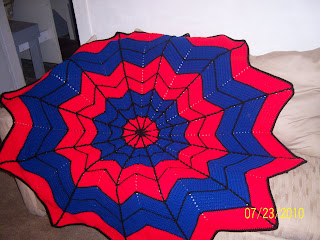