My Crochet Projects in 2010

Here's the year's wrap-up of crochet projects. I know there are a few projects I neglected to get pictures of but this should be a fairly good representation of what I accomplished.

Email ThisBlogThis!Share to TwitterShare to FacebookShare to Pinterest
Labels: crochet

I missed the WIP Wednesday over at Everyday Crochet so I thought I'd post what's going on a day late.
I have some balls of a boucle like yarn that I got at a thrift store and I thought I'd make a scarf out of it: 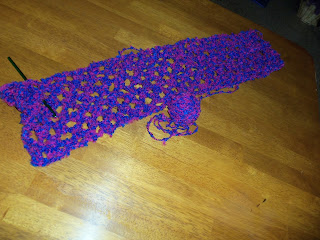 I am using this pattern: 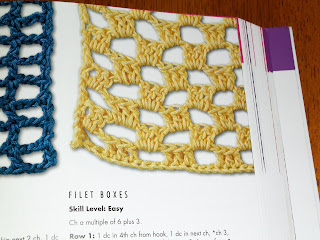 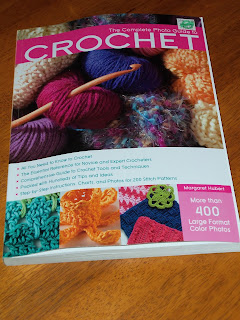 I finally finished this throw (I know you've seen it as a wip many times): 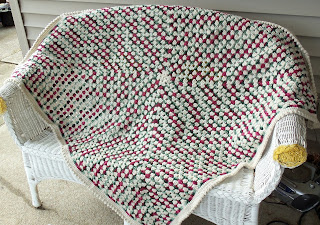 Here's a closer look at the edging: 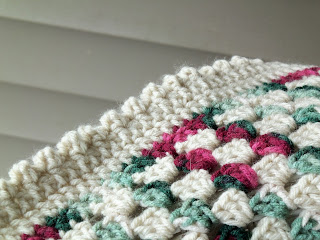 To make the edging, have the wrong side facing you and then slip stitch in one stitch and a treble (triple) crochet in the next--keep on repeating.This throw, you may remember, was to go to one of the guests I was expecting in December, but their visit had to be rescheduled.

Another guest had to reschedule their visit too and they were supposed to get this throw: 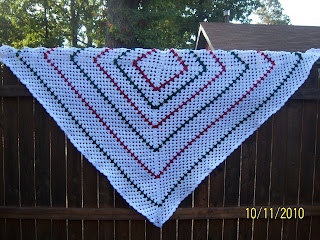 They're both planning to come through here in the spring so the first one here gets the first pick! :)

I'm not a person who stays focused on one project at a time. The other currently in progress project is a granny square ghan. My mil had found a bag of squares made and there was extra yarn included. I've been working on this for the last few days.I've been making additional squares and some of the squares were sewn together but the original crocheter wasn't paying attention to what they were doing and some were facing right side up and other squares had the wrong side up. I had to take the ones apart that were sewn together and I did have to make the last round on a few of them because I accidentally cut the wrong yarn. The original crocheter did do something that I'm not happy with and that is (s)he left short ends that could not be woven in. I'm concerned with the durability of this ghan with so many of the squares having the short ends. The colors of these squares are beautiful. Here's a look at a few of them: 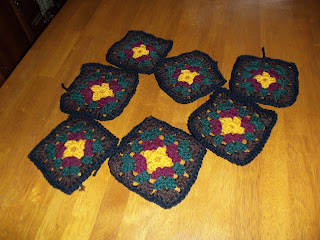 I also made a pair of men's slippers. I gave them to my son but forgot to get a picture of them before he took off with them. :) (Love ya Matthew!)