Why Won't the Scammers aka "Credit Card Services" Stop Calling? 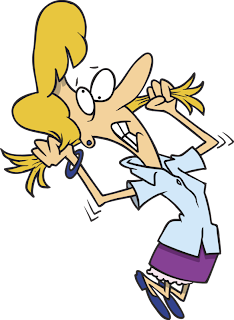 I know I shouldn't answer the phone when I see a telephone number that that starts with "000" I should ignore it. I don't even though it is probably "Credit Card Services". I want to tell them again not to call and document that they are in violation of the "do not call" registry. Tonight at about 5:15, I see the number (637) 000-2238 on my caller id. I answer it, listen to the recording press the button to speak with someone, tell them to stop calling, that I have reported them several times in the past week and will do it again tonight. I told them that they were scammers and identity thieves and to take my name off their list and stop calling. He said they were not any of the things I said they were and that he'd be calling AGAIN! I told him in bad, bad language (left over from my days as a sailor) what he could do with himself. I thought he'd hangup but he didn't and then I did. I have already filed my new complaint with the "do not call" registry. One of these days they will be caught.
Posted by Sharon Marie at 1/31/2011 05:33:00 PM No comments:

Did a Small, Quick Project Today

Today as I was keeping an eye on the worker who was fixing my oven, I decided that I needed a small project to work on because my kitchen is very small and the afghan I'm working on is getting pretty big. I went into the yarn warehouse (aka craftroom/extra bedroom) and grabbed a couple crochet-type magazines and a small bag of yarn odds and ends. I found this cute pattern for baby booties and so that's what I made. This pattern was easy and worked up fast. OK, I know I used Christmas colors but maybe someone will have a Christmas baby this year. :) Sorry the picture isn't very good, the lighting inside and outside is bad today. Here's the pic: 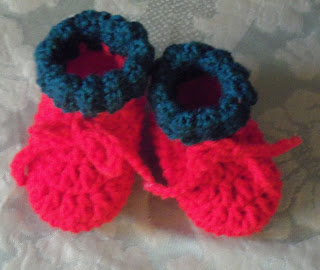 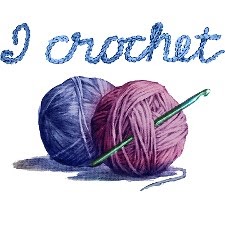 Because I love to crochet, I often get teased about not having a crocheted toilet tissue cover. Well folks, that's somewhere on the list of to-do projects. I'll get to it one of these days.  Here's a sweet looking one with a flower on it. I hope you enjoy it and thanks for stopping in. Hugs to all...