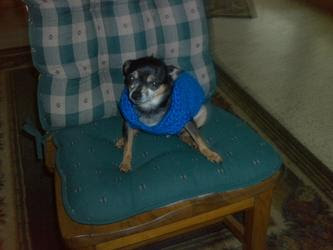 Entry for September 05, 2007--#2
I'm baaaack! Here's a picture of my little guy, Opi, modeling his new sweater I made him. I used Lion's chunky yard and it is a tad too stiff for my little guy. The pattern calls for Bernat boucle but I hate working with that stuff because it is hard to see where to put the stitches at! I might have to bite the bullet and try it another time. Anyway, Heeeeere'ssss Opi!
Note: My little "kids" aka Chis pictures are in included in their own album and also in the album of my crochet items on Flickr under MsSharonMarie. (Originally posted on my Yahoo 360 blog)
Posted by Sharon Marie at 5/30/2008 01:40:00 AM