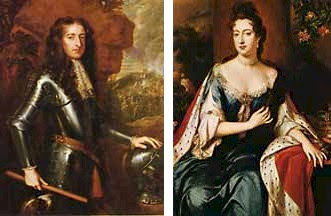 On April 21,1689 William III & Mary Stuart were proclaimed king & queen of England. Their marriage was largely a political alliance. William III and Mary were first cousins and Mary was 12 years younger than William. Willliam was not faithful--he maintained a long affair with one of Mary's ladies in waiting Elizabeth Villiers. William arrive in England with troops and took over the rule after the abdication of Mary's father James II. James abdicated under pressure because he had tried to make alliances with Catholic countries and this was not popular with Parliament and landowners in England. To read a fairly detailed although short article about William III aka William of Orange go to this page. You may a read a short article about Mary II here.
More about William of Orange